It’s day 1,062 of the Adam Study.
That’s nearly three years since he asked me on our first date — Dec. 2, 2014 — and, tomorrow, it will be two years to the day since he asked me to marry him, Oct. 30, 2015. Today marks about three years of analytical data compiled within the gray matter between my ears including his habits, expressions, non-verbals, verbal responses, body language and so on.

Does this sound creepy? Probably a little.
Let me explain.

Neurology, psychology, data analysis in general: I love it. I always have.

As a child, I was quiet and I’m still what is called an extroverted introvert — a sort of middle ground on the spectrum of social expression personalities. This personality type makes me an INTJ, based on the Myers-Briggs Type Indicator.
According to Myers-Briggs, this means I operate on introverted intuition, extroverted thinking, introverted feeling and extroverted sensing – which makes up about 2 percent of the population and is an even rarer personality for females; about 25 percent of INTJs are women. This personality relies on data and analytics, plans ahead, and spends a lot of time in their heads.

It’s only natural then that when I began dating Adam, I immediately took to studying him because I genuinely wanted to learn more about him. That’s how I experience the world around me, by collecting information and asking questions.

I think this analysis is one of the reasons why I fell in love with him, too. See, he’s very difficult to read — a less exaggerated Capt. Ray Holt from Brooklyn Nine-Nine. He’s always calm, always collected and always generally pleasant. It’s one of the aspects that makes him a great medical practitioner. It also makes it difficult to tell what he’s thinking sometimes.

But, because I am an INTJ, his demeanor and psychological processes fascinated me and I wanted to learn more about him as our relationship progressed. The way he cares deeply, the way he assesses situations and brings calm and clarity – the more I learned about his brain the more I fell in love with it.

Now, that did sound creepy.
But, you see what I mean.

But, this is why I’m a firm believer in studying those close to you – even if you’re not the thoroughly analytic type. You may be the exact opposite of me in personality, but there is still benefit to taking the time to really learn about each other.

As an EMS wife, this is particularly important for me. Early on, I knew that it was going to be very important for me to understand his mental processes if our relationship was going to succeed. He is a very strong man with an incredible internal process of handling and assessing situations. Like I said, his mind fascinates me. His bosses have applauded him for a personality which is able to handle trauma in a very unique way. It’s a rare personality and it’s one built for care taking. But, care takers also need to be taken care of.


We are very similar in the sense that we are both care takers by nature. However, our mental processes of assessing situations can differ. He is more internal than I am. I enjoy talking out situations with trusted individuals to sort out my thoughts. He sorts out his thoughts internally and then expresses his assessment externally afterward.
Since we know how the other person processes situations — whatever the case may be — we are better able to be a trustworthy, reliable and non-judgemental partner.


And that’s why I continue to study Adam and plan to do so for the rest of our marriage.
If we don’t agree, I want to know what his mental processes are that have led him to his opposing conclusion. Rather than dismissing his logic, I’d rather learn why he thinks the way he does and come to a valid conclusion. It’s like a courtroom proceeding and I greatly prefer that to arguing. So does he.
I made him take marriage counselor and author Gary Chapman’s “The Five Love Languages” test to determine how he best perceives love and acts of affection.

My great-grandmother always said fear is the absence of knowledge. I think this also applies to marriage and relationships and is why the Adam Study really has no end. I’ll continue to learn everything I can about him to learn better how to express my love, be his best friend through the happy and difficult times, and fine tune my conflict response.

I’m not a Gary Chapman. I’m just a nerdy INTJ who’s one year into her marriage with a man she’s crazy about. But, I do know that if I’m crazy about something, I’m going to learn everything I can about it. And I have facts to back that up – facts from people like Chapman or the Myers-Briggs test that are based on psychology and science.

On that first date, I was thrilled to ask questions and learn all the new things about him – as all first dates implicate. So, you might say, my continued learning of Adam is an extension of that first-date curiosity and wonder. The Adam Study is still new, but it’s made me even more thrilled to spend the rest of my life with my husband.
Yeah, saying it that way sounds a lot less creepy.

As a wife of someone with TBI, I can empathize with those who suffer in their marriage because of this unfortunate result of head injury.

Email ThisBlogThis!Share to TwitterShare to FacebookShare to Pinterest
Labels: Caretaker 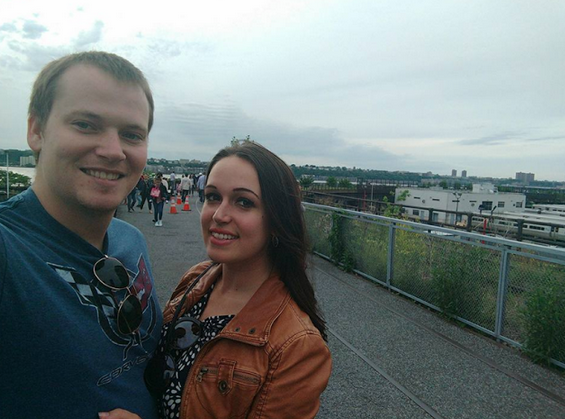 "The world is a book and those who
do not travel read only one page."
-St. Augustine

It's the idea of life as a book. We are ultimately stories, after all. Our material belongings and physical bodies are entirely fallible. So, our greatest impact left behind are the memories we shared and the stories that are told when we are long gone.
So a story, essentially, becomes our ultimate legacy.

Hello — my name's Hanna Smith, Sheri's daughter and a new blogger on The Lemonade Digest women's blog. I'll be collaborating with my mom doing posts together and independently as we share our thoughts, adventures and more on this blog.

A little about me: I am the wife of a talented emergency medical technician, Adam. We have been married a little over a year, but have known each other the majority of our lives. I am the features editor of a business newspaper, prior to which I worked as a news reporter covering the justice system. Journalism is one of my greatest passions, and I am proud to be the eyes and ears of the community through news writing.

I am also a student surgical technologist, currently in my first year of studies. Never heard of a surgical tech? We work in the operating room maintaining the sterile field and providing a third set of hands during the operation. I plan to specialize in neurosurgery, the most effective method to treat chronic pain. I am very passionate about chronic-pain awareness and you'll find frequent posts on this topic here in addition to STEM related topics.

Although my husband and I live in southwest Missouri, travel is a large part of our lives. I make this priority as a firm believer that travel is one of the most worthwhile investments a person can make. It sweetens the story and broadens worldview.

Through my upcoming blog posts, I hope to share how I am trying to consistently dive into each page of each stage of my life — and I hope to encourage you to do the same. Life has made me resilient from a young age and taught me that experience is one of the greatest gifts you can give yourself.

Please comment on any of my posts and discuss your views or something you've learned in your own life relating to the topic. Agree? Add information. Disagree? Voice your opinion. I want to hear it either way.

I look forward to being part of this blog and sharing life through it's (online) pages.