The idea that Facebook should fact check political advertisements is the next ridiculous statement to come out of Washington.

The fact that our politicians can't fact check themselves should be the 1st clue that this is not only impossible but also a standard
not held by those who insist upon it.

I think back to the presidential and congressional races in the past. Do you remember the day that the TV advertisements started adding the following phrase to the end of the commercial,

"I am George Bush and I approve this message"?
False advertising and manipulation of the political process have been going for decades via multiple methods, social media being the most current.

It isn't realistic to think that Facebook could even remotely have the ability to fact check political advertisements when the information coming out of Washington is consistently false or interpreted differently depending on who is distributing the information.

Twitter announced they will not allow political advertisements. That is one way to handle the influence of Russia, China, and other countries who have mastered the art of political deception of the American people via their most popular and destructive past time - social media. 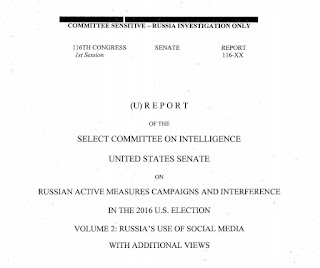 Email ThisBlogThis!Share to TwitterShare to FacebookShare to Pinterest
Labels: Sheri for President